This Achilles tank destroyer is placed at an entrance road (N833), overlooking the town of La Roche. According to the plaque this is a monument to honour the British units who liberated the town at the end of the Second World War.

Text of the plaque on the front:
ACHILLES TANK DESTROYER MK10
HONOUR AND TRIBUTE TO THE
1ST NORTHHAMPTONSHIRE YEOMANRY
WHO SUPPORTED THE
51ST HIGHLAND DIVISION
IN THE LIBERATION OF LA ROCHE
RESTORED BY MUSEE DE LA BATAILLE DES ARDENNES IN PARTNERSHIP WITH THE TOWN OF LA ROCHE 11ST JANUARY 2000

The Achilles was a British variant of the American M10 tank destroyer, the 3 inch gun was replaced by a British 17 pounder.
During the Battle of the Bulge, in December 1944, the Germans recaptured this Belgium town. La Roche was liberated again in January 1945, the second time was at a higher cost. 116 residents were killed and La Roche was almost totally destroyed.

At the marketplace you can find another tank monument, the Sherman of La Roche. 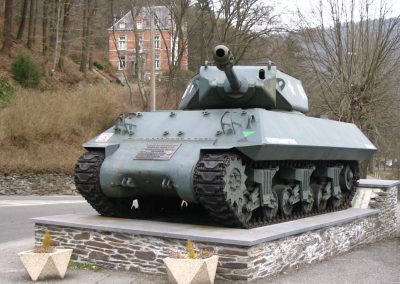 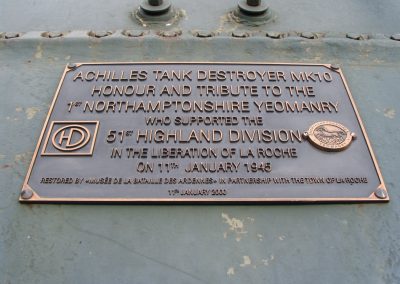