Near the city of Bastogne

A few miles north of Bastogne you can find the Recogne German war cemetery. This cemetery contains the graves of 6,807 German soldiers who died during the Second World War.
In December 1944 three German armies surprised Allied Forces in the Ardennes. This was the Battle of the Bulge or also called the Ardennes Offensive. This battle was over after a month but at the cost of many lives on both sides. Bastogne was a crossroad town and was high on the priority list of the Germans. This resulted in heavy fighting and the city was surrounded. But every German attack was repulsed. 3,000 German soldiers were killed during the battle for Bastogne and also in the German border area and Luxembourg. At first this cemetery was also the burial place for American soldiers, although there were two separate fields, in 1945 2,700 US soldiers were buried at this location.
In 1948 the American war dead were exhumed and reburied at the Henri-Chapelle American Cemetery. At the same time the German war dead, which were buried at different locations in Belgium, were transferred to Recogne-Bastogne and another German war cemetery at Lommel.
In 1954 the German War Graves Commission was commissioned with the care and upkeep of the German war cemeteries in Belgium.

Directions: Take the N30 from Bastogne to Houffalize, turn left at Foy, you find the cemetery after a few hunderd meters at the left hand side. 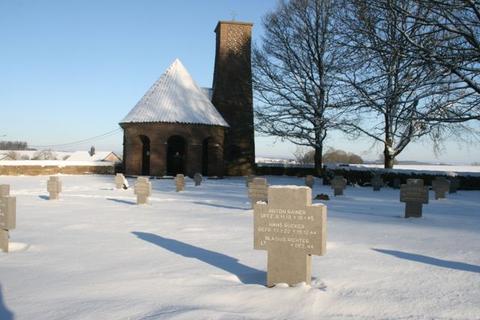