Near the city of Maastricht 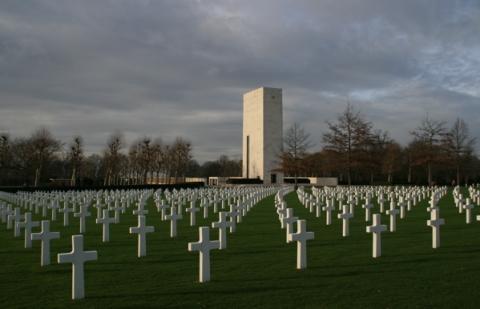 Cemetery with all adopted graves

Officially called “World War II Netherlands American Cemetery and Memorial” is located near the village of Margraten, a dozen kilometers from Maastricht. Locally called the American Cemetery, this is the only war cemetery of the United States in the Netherlands. U.S. soldiers, who have fallen in this region at the end 1944 and the beginning of 1945, are burried at this place.

Large maps of the liberation of Western Europe showing the advance of the Allies. The names of cities are listed on the wall panels, these are the regions where the soldiers were killed far from home. Many have fallen near Maastricht, Eindhoven, Grave, Nijmegen, Arnhem, Jüllich, Linnich, Geilenkirchen, Krefeld, Venlo, Rheinberg, Cologne and on the banks of the Wesel and the Ruhr . Also notable is the large number of casualties of Bomber Command (bomber crews) .

In addition to the 8,301 American soldiers who rest here, there are two large walls in which the names of 1,722 missing persons are chiseled.

On Memorial Day people commemorate the dead of WWI and other wars. Various military and political dignitaries gather here on that day. Memorial Day is on the Sunday before the last Monday in May. The locals keep the memorial alive through the adoption of graves , see www.margratenmemorialcenter.org.

About 19 km south is the “Henri-Chapelle American Cemetery “. At this place mainly the fallen of the Battle of the Bulge are resting here.

Near the Belgium city Liege is another military cemetery of the American Battle Monuments Commission, it is officially called “Ardennes American Cemetery and Memorial”. This American Cemetery is situated near the village Neupre. Most of the victims here fought in the air war over Europe.

Visiting hours are daily from 09:00 to 17:00 hours. Closed December 25 and January 1. At the visitor center an employee can provide more information about this cemetery.