Established during the Battle of the Bulge 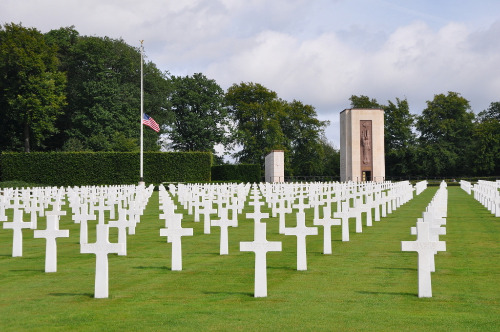 The Luxembourg American Cemetery and Memorial is a World War II cemetery located in Hamm, near Luxembourg City, Luxembourg. This cemetery was established on one of the last days of 1944 by the U.S. Third Army under General George S. Patton, Jr. By then already many American soldiers lost their lives in a forested area, called the Ardennes north of Luxembourg. Adolf Hitler had chosen the Ardennes for a counter-offensive called “Wacht am Rein” or Battle of the Bulge.

General Patton played a major role in the lifting of the siege of Bastogne. He disengaged his three divisions facing east and attacked towards Bastogne. Months after the Second World War general Patton died after a car accident in Heidelberg, Germany. He found his last resting place at this cemetery.

This war cemetery holds the remains of more than 5000 American service members, also the 317 names of those who are still missing are engraved on a wall.