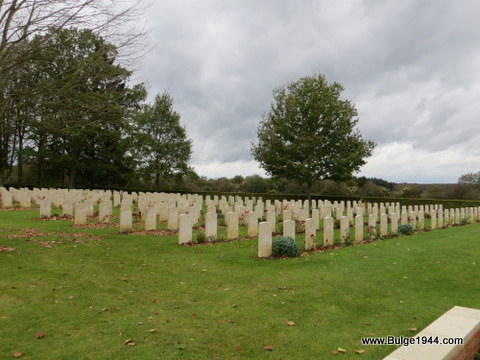 The Hotton War Cemetery is a British war cemetery is located near the village Hotton in Belgium. At this cemetery holds hunderds of burials of the Battle of the Bulge.
A plaque on site displays the following:
Hotton marks the limit of the German advance in the Ardennes counter-offensive of December 1944/January 1945. Most of the soldiers buried here died in the operations to hold and drive back the Germans. Of the 667 war burials, 340 are soldiers, 325 airmen and 1 a war correspondent; 527 are British, 88 Canadian, 41 Australian, 10 New Zealand and 1 Polish.

On 16th December the Germans launched their last counter-offensive of the war against the lightly held Ardennes sector. Its object was to recapture Brussles and Antwerp and cut the Allies’supply lines. The advance, 50 miles at tis maximum, was halted on Christmas eve. On 3rd January the Americans, with some British reinforcement, struck back and within 4 days the Germans were withdrawing. Meanwhile British Second Army eliminated the bridgehead west of the Roer and the Americans and French dealt similarly with the salient south of Strasbourg.
Location Information
Hotton is located south of Liege on the N86. On reaching Hotton follow the N86 towards Menil along the Rue de la Liberation. The Cemetery is along that road on the right.